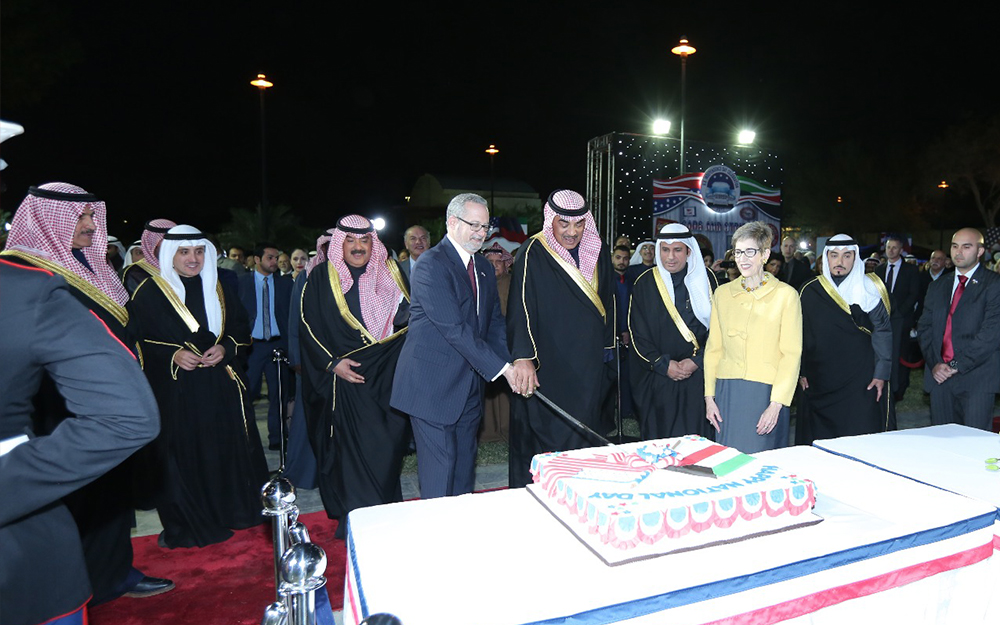 Your Excellency, the First Deputy Prime Minister and Foreign Minister, we are honored to have you here with us.  Officials of the Government of Kuwait; Members of the National Assembly; Excellencies; Members of the Kuwaiti and American Armed Forces; Fellow Americans; Ladies and Gentlemen, – all friends of the close relationship between the United States and the State of Kuwait,

Vicki and I welcome you to the Fourth of July on February 7th.  Welcome to the 241st birthday of the United States of America.

It’s been 4 ½ months since I arrived in Kuwait.  Vicki and I have been warmly welcomed, as was our son, David, when he visited recently.  I can tell you that David returned to the United States a big fan of the diwaniya — and of Kuwait.

I would first like to offer special thanks to all the very generous sponsors of this evening’s event, including those that have brought the theme of “Cars and Stripes” to life:  The Kuwait Historical Vintage and Classic Car Museum, al-Ghanim Industries, Al-Mulla and Behbehani Motor Group, and the Kuwaiti car clubs for allowing us to display these examples of American design and engineering.  And many thanks to the U.S. Army 1st Infantry band “Thunderstruck” for the music you will be hearing tonight.

Ladies and Gentlemen, we are here tonight to celebrate independence.  Kuwaitis recognized the precious nature of independence and sovereignty in a most direct way 26 years ago, and the U.S. was determined to help defend that independence.  Kuwait just celebrated 56 years of independence and is about to mark 26 years since liberation.  Its history certainly has been eventful.  John F. Kennedy once said “A nation’s character, like that of an individual, is produced partly by things we have done and partly by what has been done to us.”  So it is with all nations.

As Americans, we gather to celebrate not just the independence of our country, but the spirit of independence within our people.  Americans view nations as living entities that need to grow – to be better and to do better.  I believe that same spirit motivates the people of Kuwait.

Our new Secretary of State, Rex Tillerson, came on board less than one week ago.  As a New Englander, I have to say I was pleased to hear him tell the State Department staff that first day to follow the simple credo of the New England Patriots football team: “Do your job.”  You can rely on all of us here at the U.S. Embassy to “do our jobs” with dedication in support of U.S.-Kuwait relations and our mutual interest.

You may know that in Washington each year, the President addresses our Congress on the “State of the Nation.”  Nothing so grandiose tonight, but I am very pleased to tell you this evening that the state of U.S.-Kuwait relations is very strong.  With our Strategic Dialogue launched in October, we believe we are creating a new opportunity for significant growth in our relationship.

The U.S. Administration recognizes the importance of U.S.-GCC relations and of the bilateral relationship with Kuwait.  There will be an active U.S. role in this region. Together, our two countries will work to defeat ISIS and other extremists and terrorists, and to promote regional stability.  We greatly appreciate Kuwaiti full cooperation in these efforts, and we reiterate our commitment to Kuwait’s defense.

The United States continues to demonstrate that commitment – through the supply of military systems that enhance the capabilities of Kuwaiti forces to defend their homeland, and the training that make those systems a credible deterrent to those who would seek to harm Kuwait.  Not long ago, I was very proud to stand with Kuwaiti colleagues on the deck on the aircraft carrier USS Eisenhower and view flights of the advanced F-18 aircraft that we will be providing Kuwait.  The United States also will continue to help Kuwait prevent terrorists from threatening your security.

The U.S. will also continue to be a strong commercial and economic partner to Kuwait as well.  In 2016 the U.S. exported almost 3 billion dollars in goods to Kuwait and imported the same amount from Kuwait.  New U.S. aircraft are being delivered to Kuwait Airways virtually every month this year.  U.S. franchises have opened new locations here.  Meanwhile, the number of Kuwaitis visiting the United States for business, for tourism, for education, and for medical care was at an all-time high – 87,000 in 2016.

We know Kuwaitis are major investors in virtually every sector of the U.S. economy.  We will use the Strategic Dialogue that we have created to seek to enhance both bilateral trade and investment.

Just a week ago, I had the honor of attending the Kuwait cabinet’s rollout of the vision for a “New Kuwait.”  We want our strategic relationship to contribute to realizing that vision.

I take this opportunity tonight to restate my commitment and that of this Embassy to expanding educational and research linkages between our two countries.  Some 15,500 Kuwaiti students are studying at American higher educational institutions; we look forward to welcoming more.  There are no changes to our policy in that regard.

I salute those Kuwaitis who graduated from American universities and who have been so essential to the development of Kuwait.  Working with the Kuwaiti government, we also intend to help prepare new generations to succeed academically in America.

Virtually every Kuwaiti with whom I have spoken who studied in the U.S. also took time to travel around the U.S. That travel – by car, train or plane – was part of their educational experience – to get to know America better and to enable Americans to learn about Kuwait.

One thing Americans and Kuwaitis already know about each other is that they both love automobiles.  For Americans, cars provide a personal sense of independence.  Families posed for pictures with their cars and spent time together on road trips.  Some of the photos you see displayed here tonight are from my collection of images of proud Americans – including my own parents — with their cars.

Some of the first cars in the Gulf came here to Kuwait — brought for Sheikh Mubarak al-Sabah in 1908.  Looking at old photos of Kuwait is like looking at a catalogue of American cars of yesteryear.

And today, Kuwaitis cherish vintage American cars even as they search out the best of new American automotive style and technology.  They travel to America to attend car-related events.  The vehicles that you see around you tonight, the images on the screens, and the music you hear were designed to celebrate this additional bond between our two people.

Ladies and Gentlemen, thank you for joining us to celebrate not only America’s independence, but the ever-stronger ties between the United States and Kuwait. We commit tonight to do our utmost to enhance the ties that bind our two nations and our two peoples, for the sake of the stability, security and development of this region.