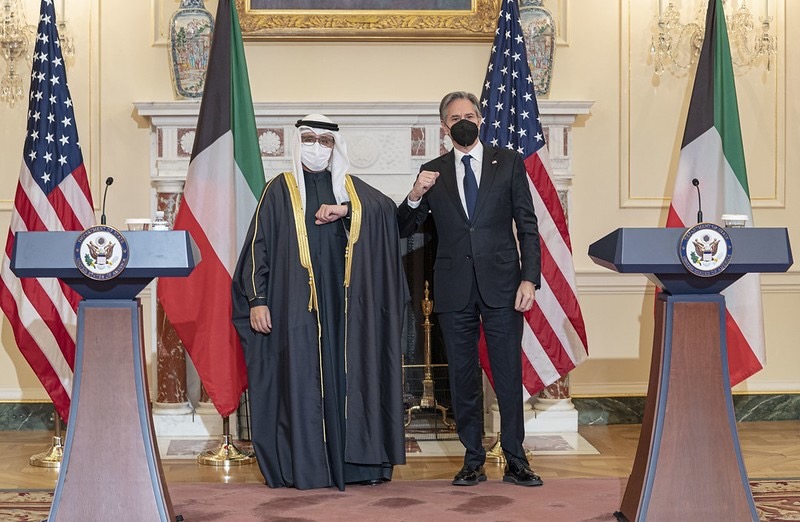 SECRETARY BLINKEN:  Good morning, everyone.  Foreign Minister Dr. Ahmed and I just had a very productive meeting.  I was particularly delighted to welcome him – Ahmed, to welcome you – to Washington and to return the hospitality that you and their highnesses the emir and the crown prince showed me in Kuwait last July.  We’ve been on the phone many times since, but there is nothing to replace person-to-person dialogue, no substitute for the kind of discussion that we’re able to have today here in Washington.

This meeting today was the culmination of the fifth U.S.-Kuwait Strategic Dialogue, with nearly a week of intensive discussions between our teams.  And it’s another demonstration of our enduring commitment to strong partnerships across the Gulf region.  This year marks the seventh decade of diplomatic ties between our countries, starting shortly after Kuwait became an independent nation.  We also recently marked, as I think everyone knows, the 30th anniversary of Operations Desert Shield and Desert Storm, when the United States led a coalition of 35 countries that brought an end to the Gulf War and liberated Kuwait.

And when it came time to end the war in Afghanistan, Kuwait stood with the United States.  You helped us evacuate thousands of people – American citizens, foreign nationals, Afghans – providing flights, medical care, clothing, even toys for kids.  Because of Kuwait’s help, thousands of people reached safety and Afghan families have been able to start new lives around the world.

This was a signal of Kuwait’s generosity and your commitment to humanitarianism and international stability.  And we see that in the leadership role that Kuwait plays in institutions like the Gulf Cooperation Council and the Arab League.  We see it in how you strive to help resolve conflicts, like in Yemen, which you’ve hosted peace talks and you’ve helped significantly reduce the threat that Daesh poses to international security even as we remain very vigilant about the ongoing threat.  And just last year, we saw this statesmanship in full force when Kuwaiti mediation helped heal a rift that had divided countries in the Gulf region for years.

The work of mediation and peacemaking never ends.  We both know that.  We spoke a lot about that today.  And I especially appreciated our close consultations today on issues that quite literally span the globe.

We talked about the ongoing security challenge posed by Russia’s provocations and threatened aggression toward Ukraine.  We agree that this crisis is much bigger than just Ukraine or even Europe.  It’s of serious concern to the entire international community.  It requires an international response.  Kuwait knows this, in a sense, better than anyone because at stake in Ukraine are some of the most basic principles of international relations that undergird peace and security, like the principle that one nation can’t simply change the borders of another by force or seek to dominate its decisions, subjugate it to its will in a sphere of influence.

We just spoke a moment ago about the liberation of Kuwait now 31 years ago, so Kuwait understands these principles very, very well.

We discussed Iran.  The United States appreciates Kuwait’s support for a mutual return to compliance with the JCPOA, the Iran nuclear agreement, because it’s the most effective way to ensure that Iran cannot develop a nuclear weapon.  We’re very grateful for Kuwait’s close coordination through venues like the GCC Iran Working Group, where we have stood together against Iran’s destabilizing actions in the region.

And we talked about our shared goal of advancing peace and security for Israelis and Palestinians alike.  I thanked the foreign minister for Kuwait’s commitment to addressing the needs of the Palestinian people, including through financial assistance to the Palestinian Authority.

The partnership we have is constantly evolving to meet new challenges, and we spoke about some of them today.  Our teams have been focused on them as well over the past week – just to cite one new front where we are joined together and working together, and that is the front of biological threats.

The pandemic has made clear to everyone – something that we repeat but is no less fundamental for being repeated – when it comes to global health security, none of us are safe until all of us are safe.  To that end, Kuwait and the United States signed a memorandum of understanding to prevent, to detect, to prepare for outbreaks caused by dangerous pathogens.  Under this partnership, Kuwait’s ministry of health and the United States will share technical information and best practices on disease surveillance.  We’ll meet regularly along with other participating GCC countries to share this knowledge more widely in the region so that collectively we’re better prepared to respond to future pandemics.

These efforts build on the work our countries are already doing to stop this pandemic, and I want to thank Kuwait again for the vital role that it’s been playing in the COVID-19 response.  Generous support to institutions like the World Health Organization and COVAX are making a difference in providing safe and effective vaccines around the world.

This level of collaboration between our countries is possible only because of the strong bonds that had been built together over the decades – forged in war, strengthened in peace.

We have strong defense ties.  Kuwait has long hosted U.S. forces.  Our militaries have worked together in many ways, including by conducting exercises and training together.  The United States is committed to supporting Kuwait’s military with assistance as well as through commercial sales.

We have strong economic ties.  Our bilateral trade relationship now amounts to more than $4.5 billion a year and we hope that figure will grow even more in the years ahead as we find new opportunities to work together in areas like sustainable infrastructure and renewable energy.

We share a commitment to freedom of religion and belief, and our countries have worked together to advance that freedom both bilaterally and in international institutions.

And finally, the beating heart of the relationship is our people-to-people ties.  Nearly 10,000 Kuwaitis choose to study in the U.S. – our universities, English-language institutes – every single year.  Thousands of other Kuwaitis and people of Kuwaiti descent live in the United States and tens of thousands of Americans live in Kuwait.  These family, cultural, educational ties are invaluable to us and I know to Kuwait as well.

On the night that President George H.W. Bush announced the liberation of Kuwait, he said, and I quote, “Tonight the Kuwaiti flag once again flies above the capital of a free and sovereign nation.  And the American flag flies above our embassy.”  Those flags have continued to fly ever since, and the friendship between Kuwait and the United States has only grown stronger.

I’m grateful for the good work that we’ve done together today, that our teams have done over the past week, and I thank you, my friend, for being here and for the commitment that we share to carry on this work in the days, weeks, and months ahead.  Thank you.

FOREIGN MINISTER AL-SABAH:  Thank you so much, ladies and gentlemen, Mr. Secretary, my dear friend Tony.  Thank you so much for hosting us, and I thank you personally for this invitation.  I’m really very glad to be back in Washington.  I’m also glad that we are able to see each other in person, so thank you for that.

I would like not to reiterate everything that you have mentioned, but to mention other angles, as I would like first to commend all of the efforts and work and laborious work of all of our delegations for their hard work and continuous efforts in preparing, conducting this dialogue round.

My visit really comes after your visit to Kuwait end of last June, only couple of days prior to the memory of the invasion of Iraq to Kuwait.  And it only showcases the strength of our – both our relationship, the commitment that United States have shown again and again with the security and stability of Kuwait and in the region, so I thank you for that.

Kuwait and U.S. are solid partners, great friends, and we are very much appreciative of this historically strong partnership and we are greatly appreciative of U.S. effort in maintaining peace and security in the region.  We have been partners throughout the three decades since the liberation of Kuwait and lots of hardship and in milestones.  We are partners in combating terrorism after 9/11.  We were partners as well with the liberation of Iraq.  And lastly, last year, with the safe transitory corridors for all of Afghanis and U.S. citizens and non-residents and – to have a safe passage through Kuwait along with the biggest operation of its kind, and we are proud to be part of that.

We value the U.S. continuous commitment to the security of Kuwait and the stability of the region, and it really exhibits a true friendship that is ironclad alliance which was forged by blood and treasure at a very critical point in history.  This year we commemorate the 31 anniversary of the liberation of Kuwait that was led by United States and also celebrate the 61st anniversary of our diplomatic relationship.

And as you are well aware and as you have mentioned, Tony, this meeting is the conclusion of our fifth Strategic Dialogue.  Since the creation of the dialogue, it has moved in a very great pace that really reflects the strong aspiration of our leadership and our people.  And we are looking forward for the next meeting, for the sixth round, and to host you in Kuwait for that.

Let me just say to thank you for your friendship again and for this partnership, and we will continue to exchange views, to cement the partnership through government institution, private sector, and people to people.  And again, I would welcome you for the sixth round of dialogue in Kuwait, and I thank you very much for your warm welcome for me and my delegation, albeit the freezing weather here.  Thank you, Tony.

SECRETARY BLINKEN:  Thank you, my friend.