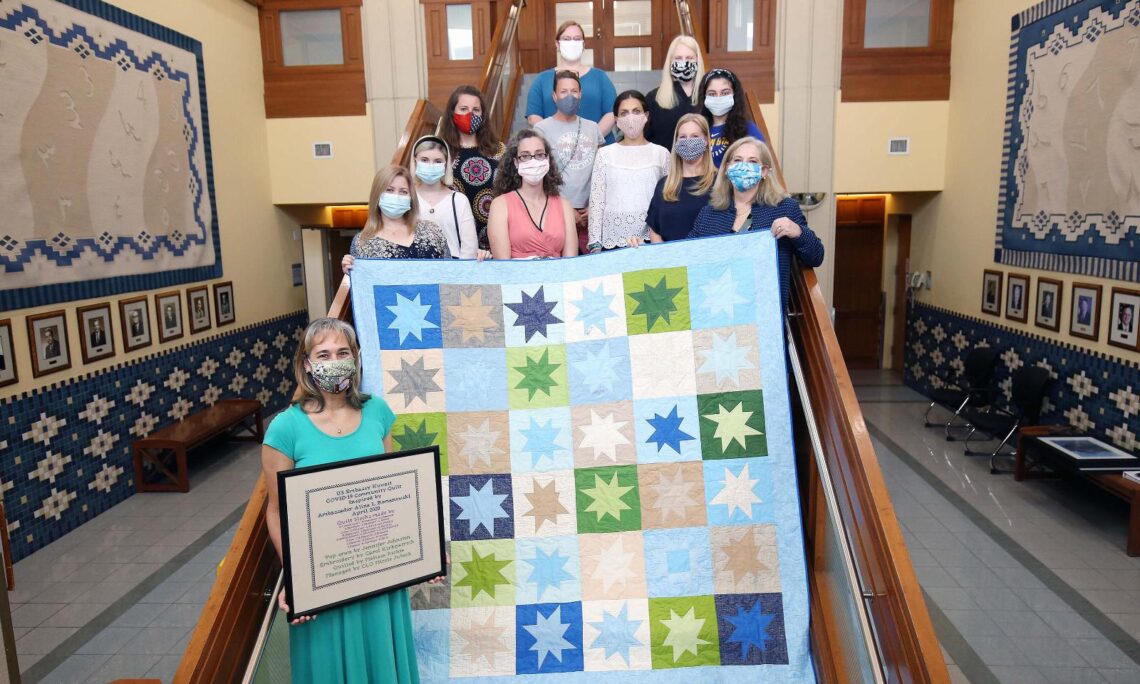 Quilting is a communal activity, one that takes time, patience and collaboration. During the lockdown period, members of the US Embassy in Kuwait community came together to create a beautiful handstitched quilt. The aim: to commemorate the pandemic, to remind all those who visit that during the crisis, people could still come together to create something beautiful and lasting.

“When we hatched the idea, it was still really very early in the pandemic. First of all, we thought it wouldn’t go on for so long. And second, we wanted something to keep the community of the embassy engaged and something we could do through social distancing. It was really exciting,” said US Ambassador to Kuwait Alina Romanowski.

Taking cues from the Ambassador, the quilting committee first identified a pattern for the quilt. They needed a pattern that was appropriate for diverse skill levels, one that would resonate with the Embassy community, and create a harmonious quilt when the individual parts were sewn together.

Members of the US embassy community examining the quilt.
US Ambassador Alina Romanowski holds up the quilt.

Among the quilters from the US embassy included several first time quilters, three generations of one family including a mother and daughter here in Kuwait who received help over Skype from a grandmother in the US. “It was a fun project and I enjoyed doing it with my mom and my grandmother,” said Aliciya Memmott. “It took us a few days to figure out how to do it and then a day to get it done.”

Choosing a motif that resonated with the embassy staff and also connected to Kuwait was key. One of the most common and popular patterns in the United States is the star motif-a motif traditionally made from squares and triangles of fabric sewn into a star shape. For the US embassy quilt, the committee choose the ‘Wonky Star’ pattern, which allows for each sewer to alter the size and width of the points of the star, creating something unique to that person. When assembled, the individual stars create a harmonious whole, despite the differences between them.

Made of 36 blocks, each with a star in the center, the quilt represents both the United States and the host country, Kuwait. Each color within the quilt represents a nod to a part of Kuwait. The tans of the many hued sand of Kuwait, the blue of the Gulf and the green of Kuwait’s statuesque date palm trees. Both local and American embassy staff took part, with 24 quilters completing the top spread. The wavy lines stitching the quilt together also represent the ripples in the sand made by the wind. Within the wavy lines are swirls, to represent the waves of the Arabian Gulf. Individual quilters also added personal touches, like their names or small designs of their pet dog, to add interest and personality to the squares.

The wavy lines and swirls of the stitching represent the wind across the sands of Kuwait and the waves of the Arabian Gulf.

The wonky star pattern allows all the quilters to individualize their squares.
Since Kuwait was still under lockdown when the quilt was finished, the team decided to send the quilt to a quilter in the States. A special long-arm quilting machine was need to sew the front and back together. Though the quilter in the US had never been to Kuwait, she immediately understood the vision and effort that had gone into making the quilt top. The outline the stars, for instance, emphasizes the connection to historical American quilt patterns.

Quilting has a long history in the United States, much the same as weaving has a long history in Kuwait. Dozens of quilts hang in the Pentagon memorializing those lost on September 11, 2001. The wondrous, artistic quilts created by the African American community in Gee’s Bend, Alabama are considered a national treasure and have toured the nation and hung in the Smithsonian in Washington, D.C.

“Quilts are made for all sorts of reasons – for weddings, marriages and births, for fund raising and homeless shelters, for stress relief and therapy,” the ambassador noted. “It represents a community. The plan all along was to leave the quilt here at the embassy as a reminder of what the community did during the COVID-19 lockdown.”