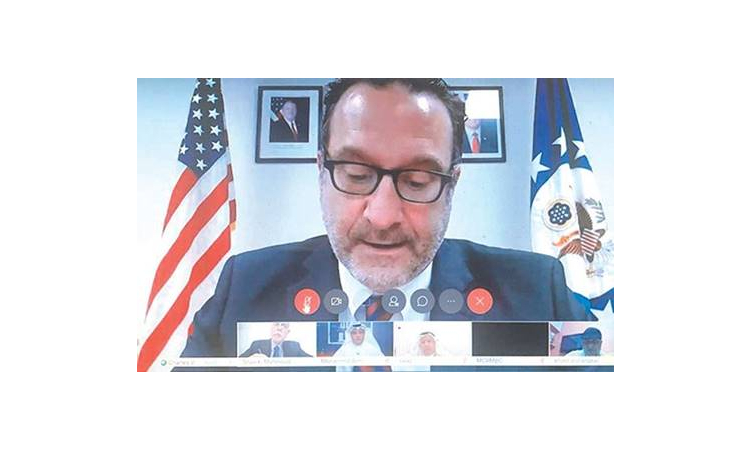 US Assistant Secretary of State for Near Eastern Affairs David Schenker praised on Sunday the strong and strategic relations between the US and the State of Kuwait, expressing his admiration for Kuwait’s stance on regional and global issues and the continuous coordination between the two friendly countries.  Schenker made the remarks, in a press videoconference he held with Kuwaiti media on the occasion of his current visit to the country.  The US official also underlined the importance of the upcoming strategic dialogue meeting between his country and Kuwait in Washington early next October, explaining that such dialogue was also the focus of his talks today with Kuwaiti officials here.  He added that the dialogue will tackle bilateral relations and cooperation in various fields, especially commercial and defense, and the threats facing the region, as well as regional issues, especially those related to combating terrorism.

He welcomed the Kuwaiti delegation, who will attend the strategic dialogue sessions in Washington.

The US official mentioned that he met earlier with Kuwaiti Foreign Minister Sheikh Dr. Ahmad Nasser Al-Mohammad Al-Sabah and Deputy Foreign Minister Khaled Al-Jarallah, as well as with Speaker of National Assembly Marzouq Ali Al-Ghanim, describing these discussions as “wonderful.”

Schenker also expressed hope that there will be a solution to the four-years Gulf dispute, which should lead to a unified Gulf position towards all challenges, hoping as well that the Kuwaiti mediation, under the leadership of His Highness the Amir Sheikh Sabah Al-Ahmad Al-Jaber Al-Sabah, would bridge the Gulf rift and bring views closer.

The official pointed to the negative impact of the Gulf dispute on the ability to confront threats facing the region, noting that his country’s efforts were not far from Kuwait’s efforts in terms of coordination (KUNA)